Many larger websites running software as a service platforms may opt to provide web API’s or other integration points for third-party developers to consume, thus providing an open-architecture for sharing content or data. Obviously when allowing others to reach into your application there is always the possibility that the integration point could be abused… perhaps someone writes some rubbish code and attempt to call your API 500 times a second and effectively initiates a denial of service (DoS). One method is to check something unique, such as an API key in your application and check how frequently its called, however this can become expensive especially if you need to spark up a thread for each check.

The solution – Do checking in software, but also on the edge, perhaps on an F5 load balancer using iRules…

The concept is fairly simple – We want to take both the users IP address and API Key concatenate it together and store it in a session table with a timeout. If the user/application requesting the resource attempts to call your API endpoint beyond a a pre-configured threshold (i.e. 3 times per second) they are returned a 503 HTTP status and told to come back later. Alternatively, if they don’t even pass in an API Key they get a 403 HTTP status returned. This method is fairly crude, but its effective when deployed alongside throttling done in the application. Lets see how it fits together:

As mentioned above the users IP/API Key are inserted into an iRule Table – This is a global table shared across all F5 devices in a H.A deployment and, it stores values that are indexed by keys.

Each table contains the following columns: 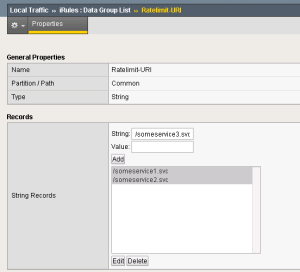 So how does this iRule work? Lets step through it:

That’s it, simple – fairly crude, but effective as a first method of protection from someone spamming your API. Making changes to the rule is fairly simple (i.e. changing whats checked, perhaps you want to look for full URI’s instead of just the path). It may also be worth while adding a check for the size of the header before you hash to ensure no one abuses the check and forces your F5 to do a lot of expensive work, perhaps do away with the hashing all together… your call 🙂

It must be noted that the LTM platform places NO limits on the amount of memory that can be consumed by tables, because of this its recommenced that you don’t do this on larger platforms or investigate some time in setting up monitoring on your F5 device to warn you if memory is getting drastically low – “tmsh show sys mem” is your friend.

Let me know if you have any questions.

Let it be known, long and far across all distant lands. The information in this weblog is provided “AS IS” with no warranties, and confers no rights. This weblog does not represent the thoughts, intentions, plans or strategies of my employer. It is solely my opinion.